It’s been a couple of weeks since I decided I wanted to write a post about this book because I wanted to share my opinion about its story and characters.

I know that right now, books about fantasy and medieval or magic wars are in trend thanks to Game of Thrones and I’ve heard people comparing these two sagas but, in my opinion, they are so different it makes no sense to do it. I’m not gonna argue about which writer or saga is better because I’m a huge fan of both of these authors, Patrick Rothfuss and George R. R. Martin, but I just wanna state that their sagas don’t have so much in common as people might think. And now we can start with

The Name of the Wind is the first book of The Kingkiller Chronicle saga which was written by Patrick Rothfuss and published for the first time in 2007 by DAW Books. 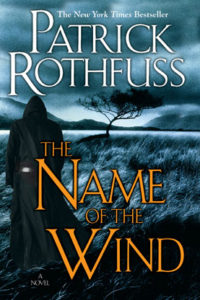 This novel is one of the best books that I’ve read in a long time. When I started reading its prologue, I instantaneously fell in love with it. Before chosing this book as my new reading I had read a couple of reviews some of them really good and others not so good, so I can say that I was pretty unbiased about it when I started The Name of the Wind. However, its prologue made an impression on me that I haven’t been able to sake it out yet.
A silence of three parts is the name of both the prologue and epilogue of this book. In my opinion, it is written so carefully and delicately that you fall under its spell. With just a couple of sentences it makes you feel the atmosphere that floats in the small inn the author is describing. It might not sound as impressive as it is but being able to wake up such a feeling of oppression and sadness in readers is not an easy thing to do and I find it awesome. In fact, A silence of three parts talks about the tense calm that you can breath in the atmosphere before a storm begins ant it shatters in a thousand of pieces.

The very beginning of The Name of the Wind tells the reader about a dark time in the life of the people who run and live in a small inn called Waystone Inn in the town of Newarre. Our main character is known as Kote there, though he, who knows the importance of Names, has worn several different ones through his life.

We don’t know so much about Kote. He’s ared head. He runs a quiet and almost unnoticed inn with his assistant and apprentice Bast, where they live a quiet and boring life. Through those first pages you can see how they have begun to wither in this environment, how the main character seems to be broken inside though we don’t know why…

But this way of living is going to be interrumpted by the arrival of a new character called the Chronicler, a man who has recognized this innkeeper as someone who is much more than that. It’s at this point where the real story of this first book begins. The story of a child called Kvothe whom several years later would run an inn under the name of Kote.

One of the strongest points of this book are its characters. It’s not that it doesn’t have action or romance or a mistery to solve because it certainly does. It’s just that it is a book about the characters. 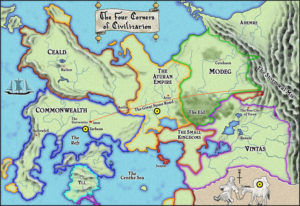 As I said before, there are two stories inside this novel. A small one where you get to know the present Kote, former Kvothe as it is his birthname, Bastas and the Chronicler and where some events start to change their peaceful life. The second story, the longer of the two and the one we can consider the main one, is where we get to know what’s the story of this man who goes by the name of Kote.

The one we can call as Kote’s story is the story of his present. It is told from a third person point of view but, even so, it is written in a way that makes you feel part of what is happening in the inn and makes you love the characters without knowing so much about them and this is what happened to me with Bast.

The main story , Kvothe’ story, is told from his own point of view because this is the story the Chronicler is going to write down. So this why the reader knows how he sees the world, how he thinks and how he feels. I love the way he talks about himself and how he perceives the people around him. Kvothe is a clever character, completely open about his experiences and feelings.

One of my favourite things about this character is the way he talks about himself. It reminds me of the way we talk about something that happened when we were younger. There is always some criticisms in our words and usually we excuse in our age our actions.

The only thing I didn’t truly liked about this book was the main female character, Denna. I don’t about her as a good female character, in fact, she’s there only because there has to be a girl the main character is infatuated with. I think there are so many interesting females in this book like Auri or Devi that I don’t know why she is the main one. Don’t get me wrong, she is clever and beautiful as every female character should be but she’s plainly boring… Maybe things will change in the second book so I’ll try to give her another chance.

I leave you here just a small fragment of this book so you can have a small taste of it.

“My name is Kvothe, pronounced nearly the same as “quothe.” Names are important as they tell you a great deal about a person. I’ve had more names than anyone has a right to. The Adem call me Maedre. Which, depending on how it’s spoken, can mean The Flame, The Thunder, or The Broken Tree.

“The Flame” is obvious if you’ve ever seen me. I have red hair, bright. If I had been born a couple of hundred years ago I would probably have been burned as a demon. I keep it short but it’s unruly. When left to its own devices, it sticks up and makes me look as if I have been set afire.

“The Thunder” I attribute to a strong baritone and a great deal of stage training at an early age.

I’ve never thought of “The Broken Tree” as very significant. Although in retrospect, I suppose it could be considered at least partially prophetic.

But I was brought up as Kvothe. My father once told me it meant “to know.”

I have, of course, been called many other things. Most of them uncouth, although very few were unearned.

I have stolen princesses back from sleeping barrow kings. I burned down the town of Trebon. I have spent the night with Felurian and left with both my sanity and my life. I was expelled from the University at a younger age than most people are allowed in. I tread paths by moonlight that others fear to speak of during day. I have talked to Gods, loved women, and written songs that make the minstrels weep.

You may have heard of me.”