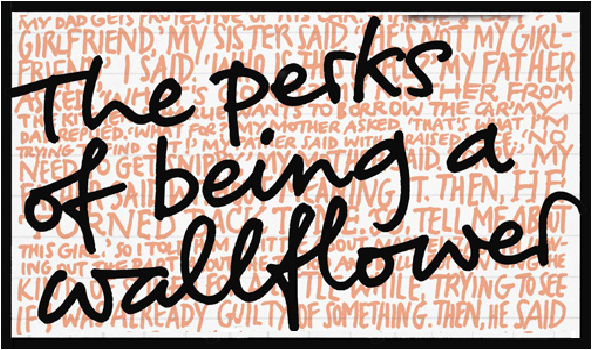 I don’t really know how I got my hands on this book… I think it was my sister who told me she had found a book that I was going to love and, as she is usually right about these things, I decided to take her advice and read it. I’ve never regretted it.

The Perks of being a Wallflower is a book written by Stephen Chbosky and published for the first time in February 1999. I could say that this book follows the style of The catcher in the rye written by J. D. Salinger, though they have huge differences in the way their stories are told and in their plots. That being told, you may think that these books don’t seem so similar, but I can tell you that they deal with the same or almost the same topics and issues.

On one hand, in these books the main character is the one who narrates his own story. On the other hand, these main characters are both troubled teenagers who have suffered some kind of lost or trauma that is defining, in some way, the way they are living their lives.

As you may know, these kind of books are called “coming-of-age” books. They are books in which the main character is usually a teenager who has had some significant problem in his or her life and who becomes an adult, or at least grows up a little, by the end of the book.

In The perks of being a wallflower, Charlie tells his own story through a set of letters that he sends to an unknow person. In fact, I’m pretty sure that Charlie doesn’t know this person himself because, in his first letter, he tells this misterious guy that he decided to write him because he’s heard that he is a good guy who knows how to listen:

I am writing to you because she said you listen and understand and didn’t try to sleep with that person at that party even though you could have. Please don’t try to figure out who she is because then you might figure out who I am, and I really don’t want you to do that. I will call people by different names or generic names because I don’t want you to find me. I didn’t enclose a return address for the same reason. I mean nothing bad by this. Honest.

The perks of being a wallflower by Stephen Chbosky

This story, his story, begins his first day of high school. High school is usually a difficult time for teenagers. It is the moment when everyone starts finding themselves and looking for a place to belong to.

These are some of the things that Charlie will also experience through this year, a year which will help him to learn what it means to be alive and to be part of that life. Thanks to the friendship developed between Charlie, Patrick and Sam, Charlie will experience new situations that will make him grow personally and know himself a little better.

Something that really surprised me is that while you are reading his letters, you become aware of the way he’s changing. This is not only due to the experiences and situations that he’s talking about, but also to the way he writes, his style. Charlie’s first letters are really simple. They seem to be written by a child. However, along the school year, these letters begin to be more complex, he begins to express himself more fluently, his grammatical structures are more complex… And, for me, that is part of the beauty of this book and one of the things that fascinated me the first time I read it.

Finally, I’d like to let you know about the 2012 film with the same name, The perks of being a wall flower, where Logan Lerman (as Charlie), Emma Watson (as Sam) y Ezra Miller (as Patrick) have participated.

Although the book is always better, I really liked this movie so I also recommend you this one.

I know there are millions of things that I’m not saying about this book like the friendship between Charlie, Patrick and Sam or the huge amount of references to great music bands or literature but I hope that just this little piece of Charlie’s world will be enough to make you give him and this book a chance.

P.D. I forgot to tell you that it is my favourite book.