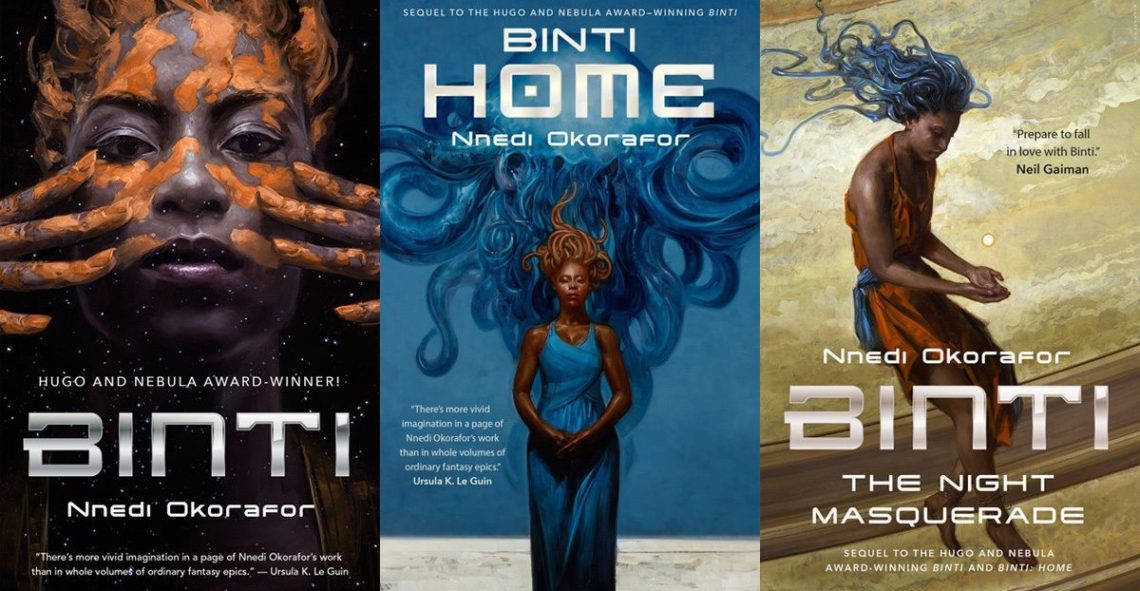 Thinking that if someone had asked me a couple of months ago about names from science fiction female authors, I wouldn’t have known how to answer is weird for me… But the thing is that, until a short while ago, science fiction female writers were quite unknown. Luckily, times are changing and authors such as N. K. Jemisin, Becky Chambers or Nnedi Okorafor are already receiving the recognition they deserve. And, as the tiniest proof, this post is about the last female author I just mentioned, Nnedi Okorafor, and her novella Binti.

When we meet Binti for the first time, we meet a 16-years-old Himba who has decided to run away from home and attend the University of Oomza. She belongs to a very traditional village that worships the land where they live to the point of covering their bodies and hair with Otjize or red land. To quote Binti herself:

We Himba don’t travel. We stay put. Our ancestral land is life; move away from it and you diminish. We even cover our bodies with it. Otjize is red land.

Though the beginning can seem a little bit typical, a main character different from their family and/or those around him or her and who decides to leave them so he/she can live his or her dreams or destiny; the writer locates her story in a world completely different from our own.

Binti takes place in a different Earth, a more evolved one. A world in which human beings travel between planets in spaceships and between cities using shuttles.

Besides, the main character is a harmonizer, a person with a kind of mathematical skill that allows her to create the best astrolabes; devices that store knowledge about their owner’s life and which are able to make predictions about their future.

My tribe is obsessed with innovation and technology, but it is small, private, and, as I said, we don’t like to leave Earth. We prefer to explore the universe by traveling inward, as opposed to outward. No Himba has ever gone to Oomza Uni. So me being the only one on the ship was not that surprising. However, just because something isn’t surprising doesn’t mean it’s easy to deal with.

And, even though it looks that way, Binti’s story is not about why she makes that decision or the knowledge she acquired in the university, at least in this first novella.

Binti’s adventure begins with that spatial travel between the Earth and the planet of Oomza Uni. During that journey, the spaceship in which she’s traveling will be attacked by the Meduse, an alien race engaged in war with the human race since a long time ago. At that moment, Binti will need all her intelligence and comprehension to be able to survive.

I must admit that, even though is an easy and nice book to read, it took me a while to get used to Okorafor’s narrative style. What I mean is that the writing style of this novella is a little bit different from the traditional style of science fiction books or, at least, it was that way for me. Even so, it is a great book. It is a really interesting and surprising story that takes you inside its world without heavy descriptions.

In my opinion, this first part of the Binti Trilogy is a breath of fresh air. Not only the writer and the main charater are women, something not so common in this literary genre, but also the freshness of story itself surprised me.

In case I have managed to arouse your curiosity, the three books that make up this trilogy and have been winners or finalists of important awards such as the Hugo’s, Nebula’s o Lotus’, have been published by Tor.com Publishing. You should give it a chance so don’t waste time and check it up!