It’s been a couple of months since this amazing series ended and I am still missing it. Orphan Black is one of those series that you haven’t heard of (at least in my country) but you should watch. I wrote my Spanish post while I was waiting for its 5th and last season and now that I’ve finished it I can only say that it is one of the best series I’ve ever watched. 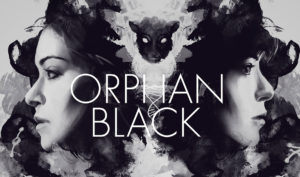 I must say that (at least in Spain) this american science fiction series is not as well know as Stranger Things or 13 Reasons Why but I’m sure that if people gave it a chance, they wouldn’t regret it. The thing is that Orphan Black is one of those series  in which every episode leaves you waiting anxiously for the next one. It reminds me to an old series called Alias, whose main character was Jennifer Garner. In both series viewrs are left with a set of misteries that will be getting solved in eache of their 5 seasons. They also have another thing in common their main character is a strong woman and in the case of Orphan Black this main character is Sarah Manning (played by Tatiana Maslany).

Sarah is not the usual sweet and strong-willed woman who gets involved in a series of unfortunate events. Sarah is a troublesome girl who comes back to her foster mother’s house after being missing for months. And why does she come back? She has stolen her boyfriend/drug dealer enough drugs to start a new life with her daughter, Kira, who she left with Siobhan (Maria Doyle Kennedy) her foster mother. But the weirdest thing about this begining is not the fact that Sarah comes home with the drugs, the weirdest thing is that when she is waiting the train that will take her home she sees a girl who looks exactly like her. After looking Sarah in the eyes, this girl jumps in front of the train that comes into the station.

Taking advantage of the confusion that this girl’s suicide creates, Sarah decides to steal her bag. Though in the begining she just pretended to get the money she could find in the bag, the appearance of her exboyfriend Vic will trigger that Sarah starts to impersonate this girl (Beth Childs, a police detective) and performs her own death with the help of her foster-brother Felix (Jordan Gavaris). 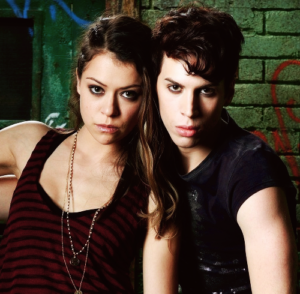 But, after taking Beth’s place she begins to discover that Beth’s life is not as easy as she expected and that she was involved in a big mess. This is where the science fiction piece that I’ve been talking about appears. When she meets Alison Hendrix and Cosima Niehaus as Beth, she discovers a new whole world with which she would have to cope.

I recommend you to watch the first 4 episodes of this series before making any judgement because it is after this 4th episode when you can know what this series is about and what is happening in Sarah’s life.

The seasons of this series are short ones with 10 episodes each of them and they always leave waiting for the next one. Each episode reveals some answers but they also rise new questions as the story goes on. Orphan Black is also a series in which women are empowered. They are the heroines of their own story. They are strong and clever and they aren’t waiting for a prince charming to save them which is a great example for girls and women right now. It also talks about family. It tells us that a family is something that we create with the people who are beside us supporting us, taking care of us and bringing us up even when we don’t share blood ties.

As always, here you have a couple of videos to check out this series. The first one is a teaser trailer released by BBC America. In my opinion, it can be too revealing so my recommendation is just to ignore it and just watch the second one which is the first scene of the first episode of Orphan Black.