Hi there! Sorry it’s been so long since we stopped here. Summer’s been busy :-P, though this is not today’s topic. Anyways, even with my busy schedule I have been reading a lot these past months, so I just wanted to review one of those books (surprised?). In the book challenge we proposed in January (wow, so long ago!), we decided that as girls, or even as boys, it is important to read (or just talk) about feminism. I know it’s not an easy topic, but that’s why talking about it should be a must. So, taking into account everything I just said I decided to read a book about feminism.

Before I start talking about the book, I need to let you know what does “feminism” mean (you’d be surpraised the amount of people who think they know what it means but don’t really know). So here it is:

”Feminism is a range of political movements, ideologies, and social movements that share a common goal: to define, establish, and achieve political, economic, personal, and social rights for women that are equal to those of men.”

And why should equal be emphasized? Just because some people think that feminism is a movement of “men haters” where women think themselves better than men which is not true. I’m not saying there aren’t girls who think themselves better than guys, I’m sure there are. What I’m really saying is that that  is not feminism. Feminists fight for the equality between the two genders and that’s it. 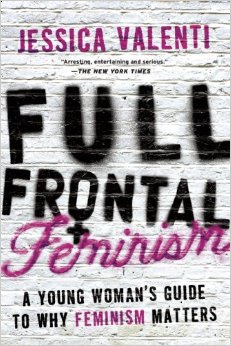 And now about the book. My choice on feminist literature was a book by Jessica Valenti called ”Full Frontal Feminism”. A friend lent it to me and I thought: “Why not? Let’s give it a chance.”. I started the book a little scheptical. I’m Spanish and it focuses in USA so I didn’t know if I could relate to its content, but except a couple of things which I can’t relate to I should say girls fight the same kind of battles everywhere.

This book tries to let you know why you are/should be a feminist and which kind of problems/injustices we should fight against. The topics that impressed me the most where the ones related to abortion and rape (you should read about them), specially the second. I didn’t know so many women were blamed for being raped… I didn’t think it was something accepted by our society so it really worried me. Even some people who work in politics blame girls who have been raped… They say it’s because of their clothes or because they have seduced those guys… come on… seriously?? I just couldn’t believe what I was reading…

The author tries to make the reader think about topics such as “why do men earn more money than girls for the same job?” or “why should guys enjoy their sexuality while girls should be almost virginal?”.

I highly recommend you to read it ‘cause you could learn a lot from it.