“In the land of Ingary, where such things as seven-league boots and cloaks of invisibility really exist, it is quite a misfortune to be born the eldest of three. Everyone knows you are the one who will fail first, and worst, if the three of you set out to seek your fortunes.
Sophie Hatter was the eldest of three sisters. She was not even the child of a poor woodcutter, which might have given her some chance of success! Her parents were well to do and kept a ladies’ hat shop in the prosperous town of Market Chipping.”

This is how the first book of the Howl’s Moving Castle or The Land of Ingary Trilogy begins. Some of you might find this name familiar ’cause some years ago the well known  Studio Ghibli released a movie, with Hayao Miyazaki as director, based on this book. The name of the movie? The same one as the trilogy, its first book and this post: Howl’s Moving Castle.From the very first lines of this book, you can notice that the writing style of Diana Wynne Jones is quite unconventional. Even though it is a book for teenagers or young adults, its sarcastic and fun tone makes it a good read for everyone. 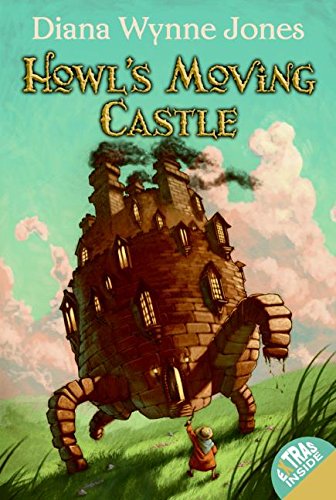 This book begins when Sophie’s stepmother decides that, in order to be able to pay her late husband’s debts, her daughter and her two stepdaughters, who she loves as if they were her own, have to give up school and become apprentices to be able to live on their own in the future.

This is how Lettie (the middle sister) becomes an apprentice in a bakery, Martha (the youngest one) leaves her home to begin her apprenticeship with the witch Annabel Fairfax and Sophie stays with her stepmother in their ladies’ hat shop so she can help with the family business.

One day, while Sophie is alone in the hat shop, the feared Witch of the Waste makes her appearance and casts an evil spell over her. This dark magic will turn Sophie into an old woman and, after accepting with resignation her new reality, will make her leave the shop to look for a solution to her problems. Then, after walking a long way for an old woman like her, she will find the Moving Castle owned by the notorious Wizard Howl.

Rumor says that Howl is an evil wizard that devours the hearts of young ladies so taking that into account, and after striking a bargain with the fire-demon who lives in the castle, Calcifer, she decides to live there and hire herself as the castle’s cleaner while she looks for a way to break the spell she’s under. And this is how Sophie, Calcifer, Howl y his apprentice, Michael, will live a series of adventures which readers will definetily enjoy.

In my opinion, this book was a breath of fresh air not only for the peculiar way of writing of its author, but also for its mere story. It is one of those books that, once you’ve finished it, leaves you a feeling of happiness, something like mental peace.

Through the pages of this book, you have no choice but to fall in love with Howl’s Moving Castle and each one of its inhabitants. With Sophie and her willing and strong personality, with the egoist, vain and conceited Howl, with the lovable and rude Calcifer, with the happy and dreamy Michael and even with Sophie’s family.

There is something else that I need to highlight about this author: the imperfection of her characters. This is something that you can notice in this book and you can confirm in the other two that belong to this trilogy.

In Howl’s Moving Castle, Jones introduces us her heroine as a defeatist and conformist young lady who aims to stay her whole life between the walls of her hat shop only because she’s the eldest of three daughters. It isn’t util the Witch of Waste casts a spell on her and she becomes an old lady that she decides to lead her own life and we begin to see a more vigorous and stubborn Sophie. She is not the typical female protagonist beautiful, kind and brave we are used to see or read in young adult books. Sophie is a young lady whose inner self is reflected in her appearance when she is under this spell: an old lady.

But she is not the only peculiar character. Howl, who we can see as the male protagonist, is a conceited, immature and not brave at all young man. However, and I don’t know how, we readers see this wizard as a charming character even with all his defects.

A curiosity for those who like animation, the japanese studio called Studio Ghibli adapted this book to the big screen, with Hayao Miyazaki as its director, in 2004. Though it is a good adaptation and this film largely respects the story and its characters, there are a series of changes in the script that allow us to say that of: the book is better than the film.

In summary, this book has become one of my favourites. I hope that, even though it is a book aimed at a youth audience, you can enjoy this book as much as I did.